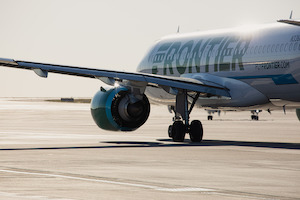 A decision by Frontier Airlines to end service this week e from Wilmington-New Castle for the second time in seven years did not come as a big surprise. One sign was the small number of cars and trucks in the airport’s parking lot and for the most part only two nonstop a week.

The light flight schedule did not lend itself to aggressive promotions and it became easy to forget Frontier had come to town.

In returning to Delaware and taking heat for the earlier abrupt departure, Frontier vowed to give the service time to build traffic. Given the state of the industry, the airline made at least a modest effort.

It was a far cry from eight years ago when Frontier (briefly) had service to a number of cities from Wilmington-New Castle. During its first brief stay, we took a flight to Phoenix via Denver. The service was great but came before Frontier started charging for everything but using the bathroom. (That might be next).

At the time, Frontier’s strategy appeared to be flawed, made worse by the limits of an ancient terminal at New Castle that appears to be stuck in the ’50s and ’60s. The airport operator, the Delaware River, and Bay Authority did some work to modernize the interior.

On paper, the latest strategy appeared to be sound. After all, Orlando is the top flight destination in the Delaware Valley. If Frontier grabbed a modest chunk of that traffic from Wilmington-New Castle, the service would reduce head-to-head competition out of Philly.

With one destination, any crowding at the New Castle terminal would be minimal.

By the time the route was launched in 2021, airlines were facing a host of challenges, despite a flood of federal funds that kept carriers out of bankruptcy court.

As passengers returned, staff shortages that were a problem before Covid got even worse.

Frontier also found success at Philadelphia International Airport (PHL) and chose to not back away from a four-way battle for Orlando passengers in Philly with American, Spirit, and Southwest. On some days, the number of Frontier’s non-stops number matches the figure for American, the 800-pound gorilla in Philly.

Cutbacks in American’s schedule and Frontier’s fuel-efficient jets also opened up options to other cities, with the carrier now serving more than 30 destinations from PHL.

In commenting on Frontier’s departure, Wilmington-New Castle Airport operator, the River, and Bay Authority pointed to another factor, the proposed merger between Spirit Airlines and Frontier.

At present, the two low-fare airlines combined have as many as 10 daily flights to Orlando from PHL, a number that would decrease with a merger.

Frontier also has two nonstops to Orlando from Trenton, an airport on the outer edge of PHL’s service territory.

The DRBA expressed hope that once the merger is resolved one way or another, Wilmington-New Castle might again enter the picture.

That could happen, but for now, Frontier has big plans in the Delaware Valley that don’t include Delaware.. – Doug Rainey, chief content officer.