GT USA Wilmington,  the U.S. arm of Gulftainer, announced  Chiquita Fresh North America will remain for another decade at the Port of Wilmington, thanks to efficiency gains

Gulftainer said the relationship “has already begun bearing fruit for the company, the port and the wider state of Delaware,” a release stated.

Peter Richards, group CEO of the Gulftainer Group of Companies said “We’ve witnessed an outstanding start to our new relationship with Chiquita.  We have worked in close cooperation with all parties to be able to achieve higher levels of performance.  However, we could not have achieved such significant gains in productivity through this transition period without the help of our partners, the ILA (longshoremen) workforce and our port employees all working in unison. Their efforts during these early operations have been carried out with the utmost professionalism and we are proud to have built these strong partnerships so early in our tenure at the Port of Wilmington.”

It is expected that operations will continue to be streamlined and enhanced as GT USA recently announced that it will soon take delivery of new cargo handling equipment as part of the modernization and improvement program at the port.

The new electric and eco-friendly equipment will not only enhance capabilities at the terminal, it reinforces GTs commitment to be conscious of its impact on the environment and the community, in alignment with our corporate values, the  release stated.

This equipment, along with other improvements forms part of the $100 million investment in the current Port of Wilmington footprint being phased in throughout 2019.

Gulftainer signed a long-term lease last year with the State of Delaware.

Major port users, like Chiquita, have been wooed by a nearby port in New Jersey. 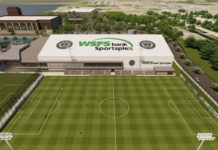 WSFS gets naming rights on sports and recreation complex in Chester, PA