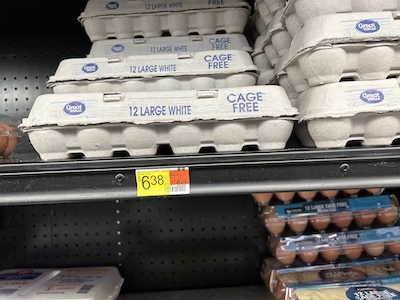 What was different at the January update that returned to a post-pandemic in-person format was the message from Philadelphia Federal Reserve Bank President Patrick Haker. In the past, Fed governors are cautious in their comments on worried that a change in tone or content might move markets.

Harker, who sits on an Fed Open Market Committee that is poised to raise interest again, was adamant about the Fed continuing to raise rates despite signs that inflation is cooling down. He did use the usual disclaimer that his views did not reflect those of the Federal Reserve. Still, The message from Harker and others in the Fed orbit, along with other news of weaker holiday sales, was not what Wall Street wanted to hear.

After a rally partially fueled by speculation that the Fed might hit the pause button, markets moved into negative territory. Meanwhile, the investment community woke up to that reality, with one or two pundits saying that the “beatings will continue” (until morale improves) in describing the Fed’s stance.

In the panel discussion and audience questions that followed the speeches, Harker took pains to dispel one of the myths that surround the Fed. Harker said the Fed does not have a secret stash of information in knocking down that myth fueled by blogs, social media, and cable talk shows.

Harker admitted that he did not pay enough attention to “soft data” that can include labor markets and consumer sentiment As you might remember, there was a widespread view that inflation was a temporary thing often driven by problems in the supply chain.

The Philly Fed chief also is well aware of the impact of inflation and higher interest rates that fall hardest on those with the least.

Soaring prices on necessities like groceries fall hardest on those struggling to pay for necessities, Harker noted. A prime example can be seen with eggs which have doubled and even tripled in price.

Pain on those living paycheck to paycheck will also occur if layoffs, partially the result of Fed interest rate hikes, make their way into lower-paid blue-collar and service jobs. So far, the damage has mainly occurred in the tech sector, with Google and Microsoft the latest to announce plans to make big staff cuts.

And while job cuts have hit tech the hardest, the advances of that sector remain a disruptive force. As fellow panelist and investment manager Michael Farr noted, technology now exists that will look for anything new in Harker’s statements, perhaps triggering machine-assisted buying and selling. That’s scary stuff, and it could be the reason the Philly Fed president made his views crystal clear.

Enjoy your weekend. The daily newsletter returns on Monday and if you have missed a couple of issues, a week in review will be posted on Satueday. – Doug Rainey, chief content officer.