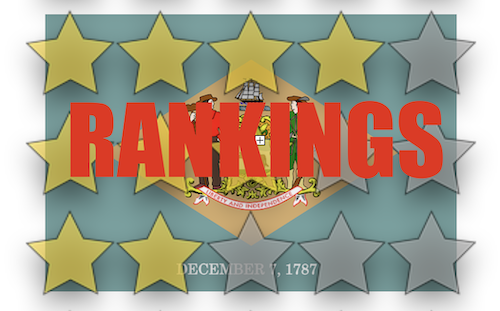 Delaware ranks 16th in its business tax climate, according to a report from the Tax Foundation.

Rankings for the state were all over the place, with 50th place among the nation’s states for its corporate income tax and 44th for its individual income tax.

Offsetting the dismal rankings in the above areas was second place for the lack of sales, tax; fourth for the state’s low property tax,, and second for a low cost of unemployment insurance.

Right-leaning public policy groups tend to emphasize the corporate tax and income tax side of the equation.

Delaware a hotbed for the smallest businesses

A report from Lending Tree has Delaware ranking in the top 10 when it comes to the percentage of business with fewer than five employees.

The No. 7 ranking came despite Delaware trailing most states in the top 10 when it came to five-year-growth for the smallest businesses.

The survey comes on the eve of Black Friday and Small Business Saturday.

This year, 42% of Americans plan to participate in Small Business Saturday. That’s down 14% drop from last year, when 49% of consumers said they would participate.

LendingTree chief credit analyst Matt Schulz says that consumers’ budgets may be tighter because inflation is at a 40-year high — and many may stick to more affordable Black Friday deals.

“People just don’t have the financial wiggle room that they’ve had in the past couple of years, so many are being far more selective with their spending,” Schulz says. “While in previous years, they might’ve been willing to get a little spendy to support their favorite local business, they may be a little reluctant to do that now.”

Consumers who plan to participate this year say they’ll spend an average of $271. That’s less than the average of $305 that consumers planned to spend last year. Those with six-figure incomes will spend more than last year.

Click here for the full report from Lending Tree.

Delaware gets a No 7 ranking on auto insurance cost

It is well known that Delaware is one of the most expensive states when it comes to vehicle insurance.

That also applies when you compare the cost of insurance to the number of miles driven.

An interesting ranking from Finance Buzz put Delaware in seventh place in the mileage to cost comparison.

The insurance cost per mile in Delaware of 16 cents matched figures for No. 5 California and No. 6 Louisiana, two states where motorists pile up more miles than their First State counterparts.