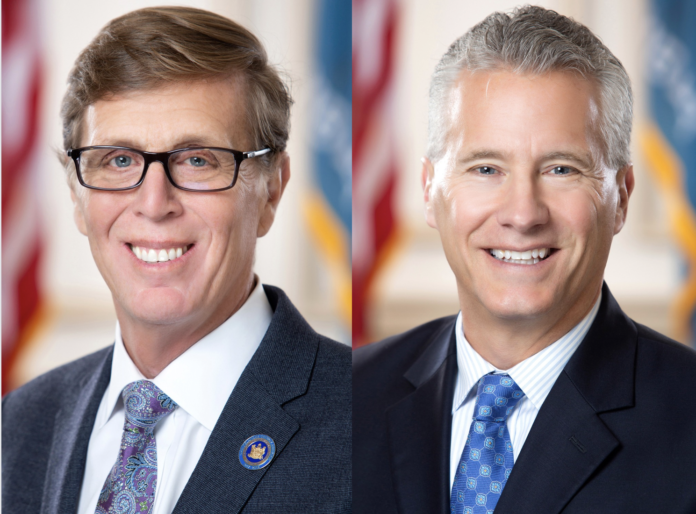 The 15 members of the House Republican Caucus met Tuesday to select new leadership for the 152nd General Assembly.

State Rep. Lyndon Yearick (R-Camden-Wyoming) will serve as the new House Minority Whip. He succeeds State Rep. Tim Dukes (R-Laurel) who had served in the role during the previous two General Assemblies.

Ramone is a business owner. Yearick is a market manager for the school test preparation company Kaplan.

This is the first time Ramone or Yearick has been in caucus leadership. Ramone has experience on the Joint Finance Committee and Bond Bill Committee, while Rep. Yearick has been a member of the Policy Analysis & Government Accountability Committee (Sunset Committee).

“I want to thank Danny and Tim for their service and guidance,” said Ramone. “Their professionalism and dedication will make this transition smooth and seamless. I think our caucus comes out of this process united and reinvigorated. Our members have a lot to offer to the citizens of this state. We plan to be agents of positive change, offering new perspectives to the challenges facing our state.”

Yearick said the time was right for a change. “I’m eager for the upcoming session,” he said. “Our caucus members have a history of reaching out to constituents and crafting innovative ideas to address their concerns. We plan to not only continue those efforts but to be more assertive in seeking collaboration and promoting solutions. We will be about ideas, not ideology.”

Ramone narrowly won re-election in November with a margin of slightly more than 40 votes that triggered a recount. The Pike Creek area west of Wilmington has the only two GOP state representatives in northern New Castle County.

. The 41-member House is dominated by Democrats who hold more than two dozen seats. Republicans were unable to pick up additional House seats in a non-presidential election year, with Democrats gaining one Senate seat.

All state representatives began their new terms of office on Election Day. They will be officially sworn in on Tuesday, Jan. 10 when the 152nd General Assembly meets for the first time.