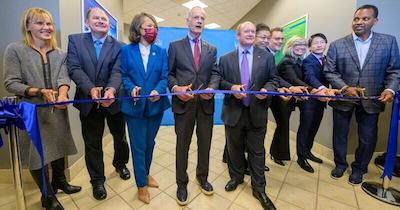 Advertisement
The University of Delaware has launched the new Center for Clean Hydrogen to accelerate the transition to clean energy by reducing the cost of hydrogen and hydrogen-related technologies.

Fueled by an initial $10 million in funding from the Department of Defense, the center will be led at UD by Yushan Yan, Henry Belin du Pont chair of Chemical and Biomolecular Engineering.

The new center will serve as a one-of-a-kind facility for fabricating and testing hydrogen technologies such as fuel cells at commercial scale.

Located in Delaware Technology Park near the UD campus, the center also will help train the clean energy workforce of the future. Additional follow-on funding and collaborators are expected as the center’s research and projects expand.

Collaborators in the new UD center include Chemours, Plug, and the U.S. Department of Energy’s National Renewable Energy Laboratory (NREL), in addition to the Defense Department.

Chemours, which established its Discovery Hub on UD’s Science, Technology, and Advanced Research (STAR) Campus in 2020, is a supplier of the ion exchange membranes at the center of electrolyzers, devices that can split water into hydrogen and oxygen using electricity, and fuel cells, which combine hydrogen and oxygen to generate electricity.

Plug, headquartered in Latham, NY, is a maker of electrolyzers and fuel cells, and NREL is involved in hydrogen research, safety and the development of building and equipment codes and standards for hydrogen production, storage, and use.

Hydrogen is widely used in industry  However, the hydrogen used today is mostly produced from natural gas and comes with a large carbon footprint.

According to a Hydrogen Economy report, industry estimates anticipate the hydrogen economy could drive 700,000 jobs in the United States by 2030.