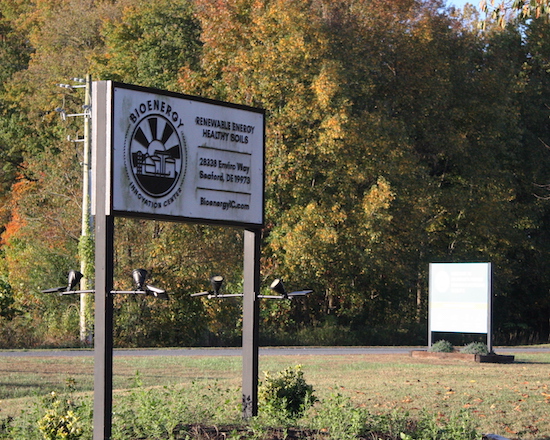 By Andrew Sharp
A bitterly contested effort to build a poultry waste processing plant in Seaford is coming to the end of the permit process, which means we’ll find out soon if it will get the go-ahead from the state Department of Natural Resources and Environmental Control.

The company Bioenergy Devco wants to use anaerobic digestion to break down liquified slurry from poultry rendering plants and produce methane. It currently runs a compost facility at the Seaford site, but would need to build new infrastructure to harvest the methane.

Methane is a potent greenhouse gas, and using it for fuel produces carbon dioxide, another less-warming greenhouse gas. However, the company argues the process is environmentally friendly in that it takes potentially polluting chicken waste and turns it into a renewable source of energy, with a byproduct of compost that can be used to enrich the soil.

That has the backing of local environmental groups like the Friends of the Nanticoke River and the Center for the Inland Bays, which see it as an improvement on what’s currently being done with chicken waste – spreading it on farm fields or putting it in a landfill where it will emit methane anyway.

A coalition of groups, including the Delaware chapter of the Sierra Club and the national organization Food and Water Watch have mounted a vocal opposition all the way through the process, arguing that the product is still a damaging greenhouse gas. They also say this plant props up the chicken industry, which they see as a dangerous polluter.

That clear divide in views could be seen in an online public hearing hosted by DNREC on Oct. 26. The agency is reviewing permits for the site.

About 130 people logged in for the Zoom call. Opponents reiterated concerns about climate-altering greenhouse gases, pollution from the chicken industry and their fears of increased water contamination. The many commenters also frequently mentioned worries about increased truck traffic, smell and air pollution from the plant, arguing it will unfairly harm the health of the Haitian and African American communities in the neighborhood.

Dustyn Thompson, director of the Delaware chapter of the Sierra Club, said they firmly believe “that this is a significant environmental justice issue and a climate issue as well,” and decried the plant’s location “in an area already overburdened by the pollution of the poultry industry.”

“When we talk about climate change we need to talk about real solutions,” he said. “Methane is not a solution. It doesn’t matter where it comes from.”

Most of those who spoke were in opposition, although as hearing officer Lisa Vest noted, comments in this process are not votes. They’re part of the overall information DNREC will consider.

The biogas company had multiple supporters as well. They included representatives from the Friends of the Nanticoke, Wicomico Environmental Trust, and the Delaware Department of Agriculture.

Judith Stribling, on behalf of the Friends of the Nanticoke, acknowledged the environmental concerns raised by many commenters but said they had been given some inaccurate information about the process.

“By taking organic material destined to decompose and capturing this decomposition gas to use as energy, the industry is making the best use of the waste material possible with today’s technology,” she said.

Those who missed their chance to weigh in at the meeting have until Dec. 2 to submit online comments.

This is the last key hurdle before Bioenergy Devco can move ahead with construction. After the Dec. 2 comment deadline, DNREC Secretary Shawn Garvin will be responsible for making a decision on the permit application, Vest said.

Michael Globetti, a spokesman for DNREC, wrote in an email that some of the concerns raised in the hearing are not under DNREC’s purview, including land use (where it’s located) and allowable traffic. In such decisions, Garvin relies on reviews of permit applications by DNREC experts, along with public comment.