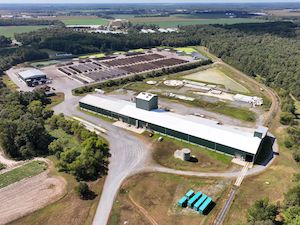 Good evening,
On the eve of a virtual (Zoom ) public information session next week, a Maryland-based company is making a case for a chicken poop to natural gas plant near Seaford.

Bioenergy Devco may not like that description, but that’s what the company has in mind at a portion of its 200-plus-acre compositing site purchased from Perdue in 2020.

Bioenergy Devco wants to add something known as an anaerobic digester to the site that would convert poultry waste to renewable natural gas.

This week, BioEnergy Devco sent out a press release highlighting what the company sees as the environmental advantages of the plant, which deals with the massive amount of waste generated by the region’s billion-dollar-plus chicken industry.

We learned that the plant would add 15-25 jobs to the 11 already at the site.

Gas produced at the site would be trucked and moved into the Chesapeake Utilities natural gas system.

Not everyone is on board, with Washington, DC-based Food and Water Watch working to mobilize opposition, including a few folks who would like to see the broiler industry simply pack up and leave. News alert – it’s not happening.

Food and Water Watch casts a wide net with its hard-line environmental stance. This includes opposition to genetically modified food. It’s OK with offshore wind, even though it involves putting platforms near fish and sending powerlines ashore.

The group also points to what it sees as the dangers of the process to the community, even with Bioenergy’s location on a large tract.

By the way, digesters are routinely used throughout the world to capture gas generated in sewage treatment.  The gas then powers waste treatment systems and reduces the consumption of electricity that can come from coal-fired plants. So far, civilization has survived.

Renewable natural gas also reduces the need to drill more wells that come with their share of environmental issues.

Others in the Delaware environmental community favor the project, which will reduce nitrogen loads in runoff that threaten Delaware’s creeks, rivers, and Inland Bays.

Without recycling, chicken litter fertilization ends up in the soil where run-off contributes to nitrogen concentrations that foul waterways.

Chances are good that the project will get the green light as it goes through Delaware’s permitting process, but expect to see more than a few fact-free claims and fear-mongering. – Doug Rainey, chief content officer.