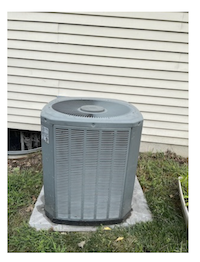 Can the lowly heat pump become an energy superhero?

The bill includes corporate tax tweaks advertised as a way to modestly cut the budget deficit. However, the major focus of the sweeping legislation is a move away from fossil fuels, including incentives for buying electric vehicles.

Moving to center stage is a potential clean energy superhero.

I’m talking about the lowly heat pump. The heating and cooling system has been around for decades and is a fixture in many Delaware homes, including ours. Heat pumps are increasingly viewed as a no-brainer in moving away from fuel oil and eventually natural gas.

Despite the green advantages, the move from fuel oil, natural gas, and propane systems to heat pumps has been slow, thanks in part to the widespread myth the systems don’t work well in the winter. In addition, conversions can be pricy.

Over the decades, heat pumps have become more efficient. States like Maine are putting to rest the myth that the system doesn’t work well in cold climates. Also popular are “split units” that can cool and heat upstairs and downstairs, often without ductwork that reduces efficiency.

By contrast, the Biden Administration has emerged as a fan of heat pumps and supports the Senate bill’s hefty rebates for purchasing the systems that can also be used in commercial structures as well in homes.

Any fast-track conversion would come with its share of challenges in ramping up manufacturing and finding enough trained technicians, already a big issue in the HVAC industry.

Based on our personal experience that included a system failing too soon, an installation by skilled technicians is a must.

Demand from Europe is another issue as nations move away from Russian-supplied natural gas and look to heat pumps as an option.

Still, heat pumps come with widespread support, and temporarily lowering electric rates for customers converting to heat pumps would be another way to encourage the conversions. (One can always dream).

A final note. Delaware is the home of natural gas supplier Chesapeake Utilities.

As of last week, Chesapeake shares are trading at a near-record level. The fossil fuels transition will not happen today or tomorrow, and natural gas will still be needed in fueling power plants that replace coal burners. Also, costs are competitive with heat pumps and provide an alternative to fuel oil.

Finally, there is a place for renewable natural gas that comes out of landfills and animal waste. Capturing that gas is an overall plus for the environment, although some animal rights folks will disagree. – Doug and Sharon Rainey