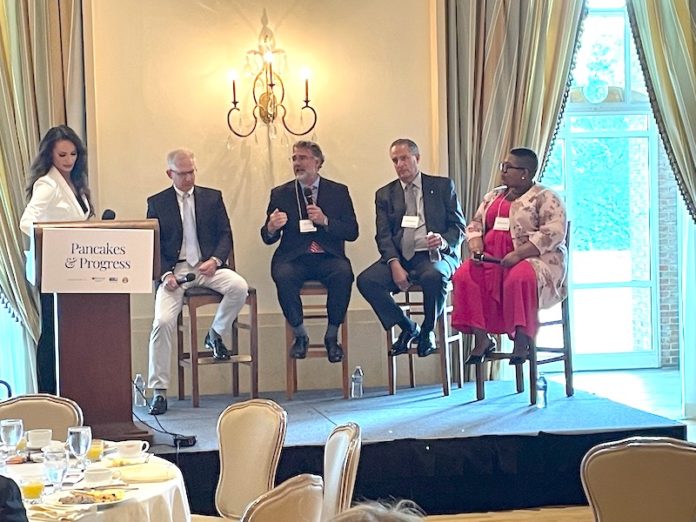 Panelists agree that college has been overemphasized

Maravelias mentioned proposed legislation that would call for project labor agreements on state work to include hiring targets for women and minorities as a way to bring more diversity to the construction industry. He admitted that the bill faces a tough battle in Dover.

Quaranta countered by saying he “wanted to hire Delawreans” and claimed the law would often bring more out of state union workers to state projects.

Panelist Byron Short said he is used to such exchanges as executive director of the Delaware Contractors Association, a group made up of union and nonunion companies. Short is a former state legislator and small business owner.

Jennifer Thompkins, head of the Wilmington Urban League and panelist, said hiring targets have been implemented in Atlanta and other areas and attract minority talent.

Thompkins also said potential employees are demanding that companies “stand for something.”

She noted that more employers are coming to the Urban League for advice. The Urban League is a civil rights organization that works with the business sector.

Moderator Vincenza Carrieri-Russo, restaurant co-owner and host of the Good Morning Wilmington TV show, moved the discussion back toward the theme of a mismatch between the needs of employers and a serious labor shortage.

All of the panelists agreed that too much emphasis has been placed on college educations, despite new grads comprising only three percent of the total workforce.

Pushing for college degrees has led to the perception that jobs in areas such as hospitality and retail lack value, according to Quaranta, who argued that people skills learned in service industries enjoy career-long benefits.

Quaranta said the labor shortage has been made worse by a wave of retirements by the large segment of the population that is now in their 50s and 60s.

Maravelias also blamed state legislators for not recognizing the value of apprenticeships, while funneling money to other areas.

Quaranta said the $15 an hour mininium wage comes with “unintended consequences” that include cost pressures leading employers to not hire inexperienced workers. He also mentioned the issue of the “benefits cliff” that occurs when lower paid workers do not take a promotion out of fear that they will lose government benefits in child care and other areas.

It was noted that the hour-long discussion barely touched on education, although one panelist noted that career education efforts need to begin before high school.

Sponsor for the event was MySherpa, an information technology services company based in Pike Creek.