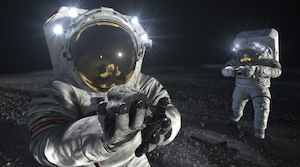 ILC Dover has been selected as part of the Collins Aerospace-led team of industry leaders, along Oceaneering, to produce NASA’s next-generation extravehicular (outside) spacesuit.

ILC Dover has its headquarters at the University of Delaware STAR Campus, Newark and a production plant and former headquarters in Fredrica, outside of Dover.

This next-generation extravehicular spacesuit could be worn by astronauts while working outside the International Space Station and one day, on the surface of the Moon.

The spacesuits will be a part of NASA’s Artemis missions, which are set to take the first female astronaut and next male astronaut to the Moon by 2025. Through collaboration with commercial and international partners, NASA plans to establish the first long-term presence on the moon.

“With more than 50 years of providing spacesuits to ensure the safety of American astronauts in the harsh environment of space, working on this new spacesuit has been the perfect project for our expert team,” said Patty Stoll, president of Space Systems at ILC Dover. “We look forward to returning to the moon again through this partnership as NASA’s provider of lunar spacesuits.”

ILC Dover will provide the pressure garment, while Collins Aerospace, the prime contractor, will supply the portable life support system (PLSS) and Oceaneering will supply the tools. ILC Dover tailored their Astr spacesuit for NASA to provide a pressure garment that offers improved comfort and mobility, fewer components while accommodating a broader range of astronaut sizes, and reduced mass, a release stated.

“ILC Dover’s spacesuit pressure garment is designed based on decades of spaceflight experience, cutting edge technology, and extensive work alongside astronauts who have used these suits first-hand,” said Nicole Stott, senior technical advisor for ILC Dover and former NASA astronaut. “As we go back to the moon and beyond, I’m especially excited about the next generation spacesuit because not only is it more comfortable and flexible, but it will also accommodate the shapes and sizes of all our crew members.”

The company is currently partnering with aerospace companies to develop a variety of solutions for the next-generation space economy, including inflatable habitats, airlocks, and shelters for use in low Earth orbit, deep space, and lunar/planetary exploration. The inflatable technology can be used to seal subway tunnels from flooding.

Recently, ILC Dover was named by Boeing as one of two providers for their Ascent/Entry Suit (AES) for the company’s Commercial Crew Program developing an AES suit for CST-100 Starliner crews.

The company’s spacesuits have been worn during more than 250 space flights, six Moon landings, and over 3,000 hours of spacewalks without a single failure. In addition, ILC Dover provided the landing airbags that created a smooth landing during last week’s successful Boeing Orbital Flight Test-2 of its Starliner spacecraft.