The National Offshore Wind Agreement (NOWA) was uthorized by 15 international union presidents and their local affiliates. The agreement covers all of Ørsted’s contractors and subcontractors that will perform offshore windfarm construction from Maine to Florida.

Off the coast of Maryland and Delaware, Ørsted is developing Skipjack Wind, a 966-megawatt project.

The agreement came as no surprise, given the Biden Administration’s push for union jobs on infrastructure projects. Project labor agreements have their critics among nonunion contractors, who claim the agreements drive up costs and limit competition.

“This is what it looks like to put the words ‘high-road labor standards’ into action,” said AFL-CIO President Liz Shuler. “The partnership between Ørsted and NABTU is monumental, for the thousands of workers who will have great jobs, and for the example, it sets for the U.S. offshore wind industry. The project labor agreement signed today is proof that labor and employers working together can create an equitable clean energy transition with opportunity for everyone. When we make good on our values – workers’ rights, gender and racial justice, economic equality, and safe and healthy workplaces – then we all win. This PLA meets that test and sets the bar high for working people and the planet. Clean energy jobs can and will be good-paying, family-sustaining union jobs.” 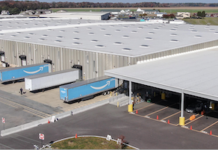