President Joe Biden spent his second weekend in a row in Delaware as his administration deals with a response to the invasion of Ukraine.

The president on Saturday spoke with Ukrainian President Volodymyr Zelenskyy who is calling for NATO to issue a no-fly zone as the nation battles Russian forces.

Earlier in the day, Zelenkskyy spoke, via Zoom,  with members of the House and Senate.

Biden and First Lady Dr. Jill Biden are slated to depart from New Castle Airport late on  Sunday night for the White House.

The president arrived at Wilmington-New Castle Airport Friday night for their home near Greenville. The Bidens have often alternated visits to Delaware with flights to the presidential retreat at Camp David in the Maryland mountains.

President Biden spoke this evening with President Volodymyr Zelenskyy of Ukraine. @POTUS highlighted the ongoing actions undertaken by the United States, its Allies and partners, and private industry to raise the costs on Russia for its aggression in Ukraine. — The White House (@WhiteHouse) March 6, 2022

On Saturday, Biden met with national labor union presidents while in Delaware. The event is closed to the media. Joining the meeting is U.S. Labor Secretary Marty Walsh.

Biden continues to push for a larger role for organized labor.

Delaware ranks below the national average in the percentage of labor union members as industrial jobs were replaced by largely non-union banking and other white-collar positions.

In the poultry industry, one of the last unionized plants will see a Teamsters union decertification vote this month. Earlier,  workers at the Mountaire Selbyville plant,  many recent immigrants, voted out the United Food and Commercial Workers local.

On Friday, the president met in the White House with the president of Finland. Finland is not a member of NATO but is said to be considering membership, given the looming threat from Russian President Vladimir Putin who seems to be intent on recreating the former Soviet Union.

Biden did receive a good piece of news Friday with a strong jobs report as well as poll numbers that showed an improvement in approval ratings after the recent State of the Union address and for his  handling the Ukraine crisis.

Biden faces continued pressure to further tighten sanctions and oil restrictions on Russia moves that could add to inflation.

Earlier in the week, he traveled to Duluth, MN, to promote the administration’s infrastructure efforts.

Biden’s visits to Delaware typically have no headline events. Last weekend he held a secure call with the national security team on the Ukraine invasion.

Accompanying the visits are staff, media, and others who book hotel rooms in Wilmington.

The president has received criticism from some on the right not staying in the White House during the invasion that has led to missile attacks on civilian targets and the taking a port city in the south of the nation that has battled long odds in fighting off the invasion.

Flight restrictions are in place around northern Delaware into Sunday. 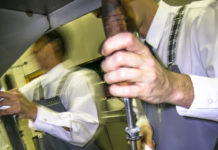