Atlantic Broadband, a company serving the fast-growing Middletown-Odessa-Townsend area,  has been rebranded as Breezeline.

Following the acquisition of cable systems in Cleveland and Columbus, Ohio, in September 2021,  the company decided to move to a name that is not limited to a geographic area.

“We’re no longer just an east coast provider, and we’ve long offered much more than broadband, so our company identity must evolve with us,” said Frank van der Post, president of Breezeline. “The name Breezeline marks the beginning of a new, exciting era of transforming our company through new growth, while also elevating the customer experience through enhanced customer care options, innovative products, and investment in the latest technologies.”

In addition to recent growth through acquisitions, the company has launched a significant fiber expansion initiative to extend connectivity to more than 70,000 additional homes and businesses in New Hampshire and West Virginia via ultra-fast Fiber-to-the-Home (FTTH) technology.

The company will also launch Breezeline Stream TV, a cloud-based, web-powered video experience allowing customers to access live and recorded programs on every compatible device inside and outside the home. Breezeline Stream TV will be launched in select Breezeline markets early this year, with additional markets added throughout 2022.

The company has launched a series of new customer care initiatives, including enhanced self-service options, a new online experience, and simplified pricing.

The new Breezeline name and logo were introduced to customers today through a redesigned website, rebranded social media platforms, email announcements and more. The company’s Columbus and Cleveland operations, which are currently operating under the WOW! The brand name will move to Breezeline by summer 2022.

Cogeco Communications Inc. also operates in Québec and Ontario, in Canada, under the Cogeco Connexion name. In addition, Cogeco Inc.’s subsidiary, Cogeco Media, owns and operates 23 radio stations in the province of Québec and a news agency.

Atlantic Broadband acquired the Middletown-area system and other holdings from cable giant Charter Communications in the early 2000s. Later, the original investors sold out to Cogeco, which retained the Atlantic Broadband brand.

It has since worked to upgrade a system subject to numerous complaints under previous ownership. 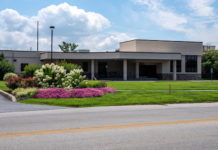