Emerging as an 800-pound gorilla on the East Coast is   Ørsted.

The Danish company, with $12 billion in annual revenues, uses the Danish-Norwegian letter  Ø, not a bad move in touting your green credentials.

Ørsted was formerly known as DONG Energy (Danish Oil and Natural Gas), a bow to its fossil fuel roots. For obvious reasons, associating your brand with a  U.S.  slang term for a male body part was not a great idea.

Ørsted was recently selected to work with a unit of  New Jersey  Public Service Enterprise Group (PSEG) in building a massive wind farm off Atlantic City, NJ by 2024.

Half a million homes

This project would provide power to half a million homes, far more than the  350,000 dwelling units in Delaware. PSEG is the majority owner of the aging Salem nuclear plant complex across the river from the First State.

Ørsted  already operates a small wind farm off  Rhode Island’s Block Island and was awarded rights to develop the Skipjack wind farm off the Maryland coast, near Delaware’s Fenwick Island. Power from Skipjack could connect with the grid in Delaware.

Other Ørsted projects off Long Island, Rhode Island, Connecticut and Virginia are in the works.

Ørsted, which developed the first offshore wind farm in the early ‘90s, estimates its development pipeline amounts to two gigawatts on the East Coast, slightly less than the output from the Salem nuclear complex.

The projects would create  thousands of construction jobs, many long-term positions and added tax revenues.

While the company has a lot on its plate, Ørsted figures it can capture  efficiencies with multiple projects.

Things that could go wrong

A lot can happen in the coming years that might stymie offshore wind. A deep recession or a collapse of capital markets is not out of the question.

Another issue is cost, with foes pointing out subsidies and incentives from states.

President Trump, a supporter of coal,  threw out the possibility of the wind dying down and Americans having no way to watch their TVs.

Natural gas could fill any gaps, although opposition is growing in using any fossil fuel.

As you might remember, Delaware was first out of the gate with the Bluewater Wind project off the coast at Rehoboth Beach.

Bluewater struggled with a lack of federal regulations associated with offshore wind, a recession that cut power consumption and poor conditions in capital markets. The project appears to be dead, although Gov. John Carney announced the formation of a panel charged with studying the potential for wind power.

Climate change skeptic David Stevenson of Delaware’s  Caesar Rodney Institute argues  that Delaware is not far behind Maryland in pursuing  an offshore wind project that would increase  electric rates.

Supporters of wind power point to costs that remain steady through the lifespans of turbines. Costs are also dropping for offshore wind, especially in Europe.

Any thoughts pro or con? Let me know.  Simply hit return and type away. If this newsletter was passed along, sign up here  to get your own five-day-a-week email report at no charge.  – Doug Rainey, chief content officer. 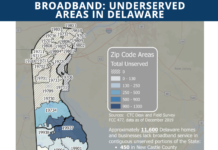 My take: Task of watering ‘broadband deserts’ gets underway