Over the weekend,  the annual Common Wealth Awards of Distinguished Service celebrated three achievers for their lifetime accomplishments.

The awards recognize individuals who have enriched modern culture through their professional and personal endeavors.

The 2019 Common Wealth Award recipients are:

The honorees were recognized at the Common Wealth Awards ceremony hosted by The PNC Financial Services Group at the Hotel du Pont in Wilmington.

In the 40-year history of the Common Wealth Awards, more than $6 million has been awarded to 204 honorees.

“During a year in which we celebrate a milestone in the history of Common Wealth Awards, it is especially fitting that the fortieth anniversary honoree class features some of the most accomplished and admired men and women in their respective fields,” said Bruce H. Colbourn, market executive of PNC Bank in Delaware. “We applaud these high achievers for their accomplishments and unwavering commitment to excellence.”

Ralph Hayes, the creator of the Common Wealth Awards, served on the board of directors of one of PNC’s predecessor banks in Delaware from 1935 to 1965. Through the awards, he sought to recognize outstanding achievement in eight disciplines: dramatic arts, literature, science, invention, mass communications, public service, government, and sociology. The awards also are an incentive for individuals to make future contributions to the world community.

The Wilmington  event has become more private in nature in recent years, with no public announcement of recipients or media or community interviews prior to the event. 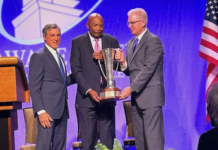