When I last checked in on Henrik Fisker, the Danish-born auto designer was at work on a lower cost vehicle.

You might remember Fisker as the suave entrepreneur behind the failed Fisker Automotive hybrid venture that promised a new lease on life for the former GM Boxwood plant by way of a $40,000 hybrid.

Hundreds of millions of dollars in later (Delaware forked out  $20 million or so financial package) Fisker crashed and burned after the feds pulled the plug on their loan.  A loan to Tesla, also a part of the federal loan program, was paid off early.

Fisker’s first car, the Finland-assembled Karma, was beset by problems not in keeping with a vehicle with a six-figure price tag. Its shortcomings included fires, bad batteries and according to one report an embarrassing breakdown during a test by Consumer Reports.

A Chinese auto parts company purchased the remains of Fisker’s enterprise and after some effort brought an improved Karma back to life at a small assembly plant in Southern California.

Bloodied but unbowed, Fisker decided to go the all-electric route of Tesla while seeking out investors. A press release or two showed up in my In Box at one point.

As the LA Times reported, the never say die auto entrepreneur, is seeking out investors and has hired few automotive veterans to bolster his enterprise.

In typical Fisker fashion, he proclaimed that a solid-state battery was in the works, even though breakthroughs in that more efficient method of storage are believed to be years away.

He backed away for now from the solid-state possibility and is now shooting for a $40,000 vehicle in the hot-selling crossover SUV category with lithium batteries.

As the Times notes, we may have seen this movie before. After all, the Fisker to be built at Boxwood was slated to carry a $40,000 price tag.

He also says that five states are interested in being the site of an assembly plant. It is hard to believe that any state would want to roll the dice after Delaware’s experience.

Still, Fisker has a knack for automotive design and salesmanship and his plans are taken at least semi-seriously in the green vehicle media.

Delaware will probably take a pass on having any interest in Fisker’s next move. – Doug Rainey, chief content officer. My take: Letting the marketplace detrmine the fate of electric vehicles 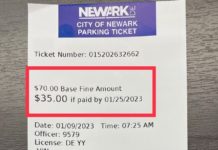 A tale of two cities and their parking tickets