Delaware is in the upper half of the 50 states in a ranking of the best place to open a marijuana-based business.

At 21st  the  First State ranked higher than New Jersey, which appears to be moving closer to full legalization of marijuana, but well below No. 12 Maryland, which is rolling out its medical marijuana system.

The report from FitSmallBusiness.com noted that regulatory and other barriers remain high in many states.

Ranking No. 1 was Oregon, due to a lower cost of living than nearby states on the West Coast and lower taxes. Massachusetts, Maine, and Vermont have the highest rankings on the East Coast.

Delaware has been building out a medical marijuana dispensary system that uses greenhouses on their properties to grow marijuana. A fourth is expected to open in Newark by this spring.

Sussex County has a dispensary that is supplied by the First State Compassion Center, located near Wilmington.

Full legalization efforts have failed to date in Delaware. 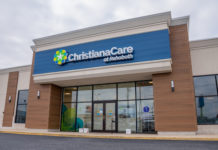