The Center for the Inland Bays  has taken Mountaire and the Delaware Department of Natural Resources and Environmental Control to task for what the organization sees as  wastewater management and a lack of regulatory enforcement at a poultry processing plant in Millsboro.

The center compiled a report, issued last month,  with the help of Freedom of Information requests.

“The Mountaire facility has a history of chronic permit violations that has resulted in significant pollution of ground and surface waters afforded the state’s highest level of protection,” the reported stated.

“DNREC’s permit compliance reviews indicated that Mountaire did not accurately calculate the amount of nutrients applied to its fields and thus the amount of nutrients entering groundwater. Given this, combined with the record of wastewater effluent nitrogen concentrations, it is possible that the facility may not have been in compliance with its permit limits since 2005. Nitrogen concentrations of wastewater effluent, groundwater in monitoring wells, and shallow groundwater indicate significant and increasing pollution,” the report indicated.

The summary concluded: “To date, neither EPA nor DNREC have enforced compliance with conditions of the facility’s multiple permits and orders, and this contributed to the ultimate failure of the wastewater treatment system in 2017. This appears related to an ongoing issue with DNREC’s enforcement of some Clean Water Act programs and the understanding of responsibility for enforcement between EPA and DNREC.”

Mountaire has not commented on the report, but in the past has stated that the problems date back for decades, with high nitrate levels a long-term issue in the area.

Last year, the company disclosed that it had fired its wastewater staff and has announced an upgrade of wastewater operations that will run into the tens of millions of dollars.

A Secretary’s Orderfrom DNREC allows the company to store sludge that is being dewatered as part of a plan to improve wastewater operations. 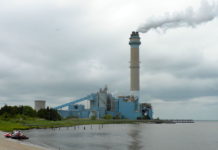